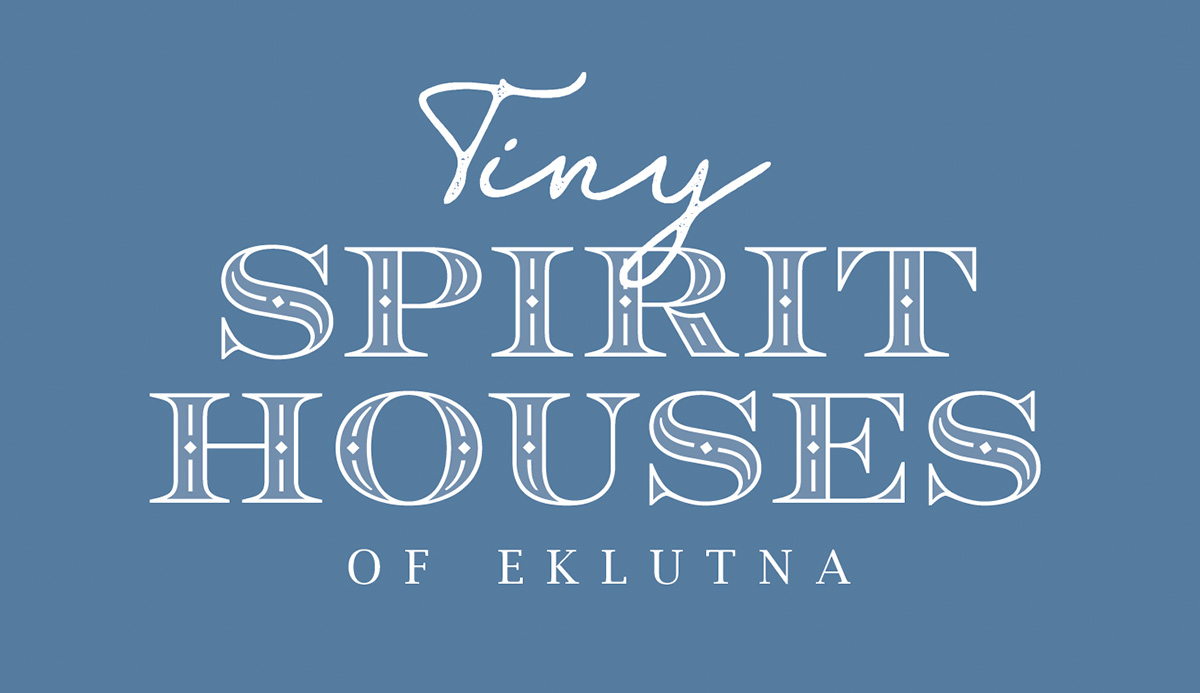 Alaska has ice-age glaciers, the spectacular Northern lights, lush forests, brown bears snagging salmon from majestic streams and soaring bald eagles – and extremely harsh and unforgiving winters. But with an abundance of diverse wildlife, the hopes of possibly striking gold or enjoying the solitude of the vast wilderness, Alaska truly is the last frontier.

For a Craftsman. From Craftsmen. In Loving Memory of a Brother – Spirit house to look like a church painted white with a red roof, complete with a turret. A white, wooden three-barred Russian Orthodox cross leans up against the front door, outlined with blue paint and with a small nameplate bearing the
name of the deceased mounted over the front door. Photo by Pashman

Russian presence in South Central Alaska was well established in the 18th century. The United States bought the territory from Russia in 1867 for $7.2 million, and, nearly a century later, in 1959, it became the 49th state. This magnificent territory has 17 of the 20 highest snow-covered peaks in the United States and is bordered by Canada’s Yukon Territory, British Columbia and the Beaufort Sea and Arctic Ocean, which is home to the acrobatic and graceful humpback whales.

Juneau, the capital, is located in the Gastineau Channel and the Alaskan panhandle, about 550 miles from Anchorage, Alaska’s largest city, which is in the South Central part of the state on the Cook Inlet. This region has a rich cultural heritage of indigenous people called Dena’ina, and this is where our story begins.

The Dena’inas are descendants of the Athabascan people, who crossed the Bering Strait 12,000 years ago. They migrated to South Central Alaska around 1,000 to 1,500 years ago from the Mulchatna and Stony River areas, and, because they lived on a saltwater coast, they were able to have a sedentary lifestyle.

The Dena’ina people are organized into regional bands or ht’ana, which have several villages, each containing multifamily dwellings called nichil. The villagers are divided into local clans. Men, women and children belong to their mother’s clan. The villagers are allowed to marry only outside of their own clan. They speak Dena’ina, which is one of 11 Alaskan Athabaskan languages; four primary dialects are spoken today.

About 24 miles from Anchorage is a small Dena’ina village called Eklutna, which today has a population of 70.

Eklutna Village was established by a tribe of Tanaina Indians who move there from Knik in 1897. It is home to a small, quaint cemetery established in the 1650s, which is surrounded by groves of trees and nestled at the foot of the Chugach Mountains. Within the cemetery is the Old Saint Nicholas Russian Orthodox Church, a small spruce log building constructed around 1894 and moved to the cemetery in 1900. A newer ornate Russian Orthodox Church, painted white with blue trim, was constructed by Chief Mike Alex and his sons.

Completed in 1962, the New Saint Nicholas Russian Orthodox Church sits to the south of the original church. On its gable roof are two shiny copper onion-shaped domes, each with a large three-barred Russian Orthodox cross. Inside, intricate, hand-painted images of Orthodox saints adorn the walls, representing the time when Alaska was a part of imperial Russia. It’s one of only 19
Orthodox Russian Churches remaining in Alaska.

Looking out over the cemetery, you cannot help but notice 100 tiny, multicolored houses called spirit houses scattered about the grounds. They are about the size of doll houses, which is a unique trait of the Dena’inas.

American colonists started arriving in the area around 1915, and the Alaskan Railroad opened up the region by constructing a siding and rail station house in the village in 1918. The federal government operated a boarding school for native children and later the U.S. Army established a facility there in the mid-1900s. Neither facility remains today.

Centuries ago, the Athabaskans believed in cremating their dead, placing the ashes in a birch bark basket and putting them in a tree or by the riverbank, believing that the spirit would make its final journey to “the high Country.” However, this is where the two cultures finally collided. The Orthodox priests forbid cremation, and, since many of the Dena’inas had converted to the Russian Orthodox religion over the years, a compromise was reached where they would bury their deceased family members and erect spirit houses over the graves in the tiny graveyard surrounding the two Saint Nicholas Russian Orthodox Churches.

When a tribal member dies, the entire village comes together to grieve with the family and friends of the deceased. According to tradition, the Dena’ina conduct a ceremonial

There were over 30 safety coffin designs patented in Germany alone in the early 1800s with the com-mon theme of the dead being able to communicate with the people aboveground and possibly save their life.

Let’s review some of the bizarre U.S. patents of the 19th century and you can make your own determination if the inventor had a good idea or were they a little eccentric? Most of the patents filed were designed to operate when the coffin and body were fully interred. No doubt, some of the designs must have had design flaws, which makes one wonder if the invention would have worked properly if used.

Burial Casket – Patent No. 329,495, dated Nov. 3, 1885. Applied for by Charles Sieler and Frederick Borntraeger, Waterloo, Iowa.
According to the patent, it states that the applicants have invented a certain new and useful improve-ment in Life-Guard Signals for people buried in a trance or before death, with the combination of a coffin the person is enabled to give a signal and to put in operation a fan or air-blast mechanism to force air through a large tube into the foot end of the coffin lid.

This is accomplished by a wire passed down a large tube running from the ground to the upper portion of the coffin and attached to the thumb of the person, which is then connected to a trigger and placed beneath a lever attaching to the clock-work mechanism of the fan.

According to the patent, “When the hand is moved, the exposed part of the wire will come in contact with the body, completing the circuit between the battery powered alarm and the ground to the body in the coffin,” – causing the alarm to sound. Air would also start flowing through a large tube into the coffin.

When activated, there is also a spring-loaded rod that will raise up, carrying feathers or other signals such as a flag to people above the surface of the ground – alerting them that movement of the person has occurred. A lamp can then be lowered down tube positioned over the face of the buried body and the person looking down through the tube can see the face of the body in the coffin to confirm life.

The patent explains that the body in the coffin has a cord attached to the hand, the cord is drawn through the square tube and is attached to a bell above the surface of the grave and the tube is attached to the lid of the coffin. The coffin is lowered into the grave and backfilled with dirt to the air-inlets. If the person in the coffin returns to life, he can decide to ascend from the coffin to the surface by a ladder; but, if too weak to ascend by ladder, he can pull the cord attached to his hand and ring the bell, giving the alarm for help, and thus saving himself. There is also a glass door on the coffin top, which may be easily raised or seen through for inspection of the person laying in the coffin. Should life be extinct, the square tube is removed and the sliding door is closed.

Devise for Indicating Life in Buried Persons – Patent No. 268,693, dated Dec. 5,1882. Applied for by John G. Krichbaum, Youngstown, Ohio.
If the person buried should come to life according to the patent, a T-shaped pipe passed into the coffin can be turned by the person using both hands – and an indicator above ground will show it’s been turned. The person can also push the pipe upward and push the glass cover off of the top of the grave and a supply of sufficient air will flow, allowing the person in the coffin to breathe freely until help arrives.

To keep rain or other water from entering through the pipe, the box above the grave may be covered by a glass casing, so that the index indicator will still remain in full view of persons passing by. When the person has been buried a sufficiently long time to ensure the certainty of death, the aboveground apparatus may be removed by lifting the box and tube out of the grave, leaving the T-shaped handle in the coffin.

Today, inventors are taking a different twist on death – not focusing on being buried alive but on how the dead can communicate with the living using modern technology. For instance, there is a patent applied for by Jeff Dannenberg in 2010.

The description of the patent states the casket has an audio message system (20) containing audio and music files that are automatically played in accordance with a programmed schedule, thereby allowing the dead to communicate with the living. The system also allows for wireless updating of the recorded files, giving “surviving family members the ability to update, revise and edit stored audio files and pro-gramming after burial.”
Many Life Signs and Safety Coffin patents were filed over 150 years ago with the U.S. Patent Office, and we will never know the state of mind of the inventors or who they were. None of the patent designs filed sparked much interest with the public or even the funeral industry and there is no proof that any of the designs ever came to market or evidence that anyone was ever buried in a safety coffin, thus saving their life from pre-mature burial.

The story continues next month in American Funeral Director with unique funeral merchandise patents filed in the 1860s. These revolutionary coffin designs were apparently only a dream to the inventors as none ever came to market. From the collection of the National Museum of Funeral History will be photos of each of these intricate handcrafted patent models, which were required at the time of filing for a patent. • 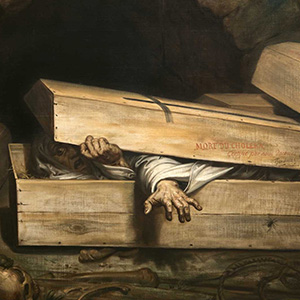